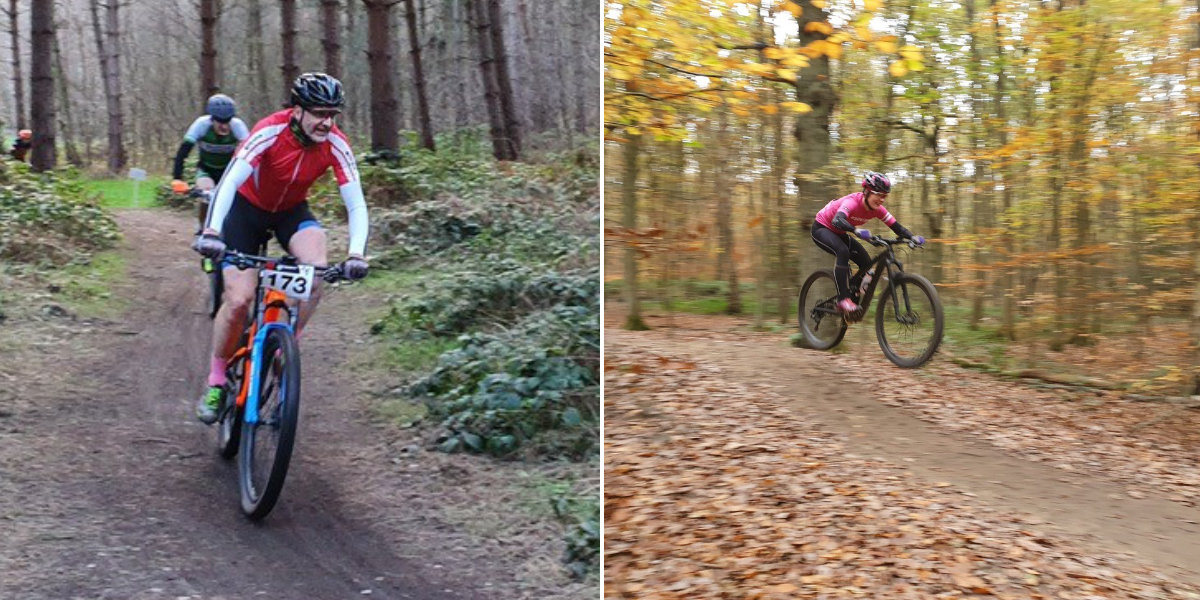 This year, we’re looking forward to the first proper season of racing since 2019. Whether it’s road, enduro, cross country or downhill, all have been affected by the pandemic… until now, fingers crossed.

To mark the start of the new season, we’re introducing two more of our Big Bear Bikes supported riders, Peter and Jane Squires from Tadcaster, who compete at national level in cross country. In this blog, we find out more about them, their take on competition riding and their aspirations for 2022.

Jane Squires had more reason than most to be happy with her performance last weekend. It was the opening competition in the Crank It Midlands Series at Sherwood Pines, which is supported and sponsored by Hope Technology.

Jane, 52, was second Grand Vet Female and 18th female out of 30, over all classes, with really consistent lap times. Peter, 51, was 17th Grand Vet Male out of 37 in class, having started right at the back and managing to get past an additional 11 veterans who started a minute before.

Like many, this was their first race for nearly three years. But unlike most, it marked a comeback from illness which could have meant the end of more than just racing. In 2019, Jane had a severe kidney infection, which was so serious she might not have come home, never mind race again.

Jane said: “To be able to ride again was amazing and to get back into racing was just fantastic. I put a lot of work into training and trying to balance that with appropriate rest. It felt good. I’m really pleased with it.”

Peter said: “The main driver for Jane getting back fit was so we could get out and ride bikes. Because of Covid, we’ve been able to gently get back into it. For me, my fastest lap was my last lap so I know there’s more to give next time.

“We’re both very happy with the way that the day went, especially as we hadn’t raced for so long and we both started from poor positions on the grid.”

Jane and Peter compete in cross country on their Trek Top Fuel 9.8s with AXS Reverb dropper posts. For the uninitiated, this is typically about one-and-a-half hours round a set course, usually doing four or five laps. They also compete in cross country marathon, which is either one big lap up to 40 miles or two laps adding up to 40 miles. They race in the HSBC UK National Series, which is run through British Cycling, plus several of the regional series and the Crank It Series.

They both have a fantastic outlook on racing and riding in general, simply loving the opportunity to get out in the fresh air together, seeing different places and enjoying the countryside. It’s an ethos we fully subscribe to at Big Bear Bikes; that riding is about having fun, improving physical and mental health, and appreciating the world on two wheels.

Peter said: “We’ve both been competing regularly since 2009, with very little success to begin with. We don’t race for results particularly. We like the camaraderie, the social side and going to different locations.”

Jane adds: “We don’t ride to race. We race to ride. And it’s a reason to keep fit because you don’t want to disgrace yourself.”

This kind of attitude is essential for competing in mountain bike series, especially in the veteran classes, as you can often find yourself up against riders who have ridden at incredibly high levels.

Peter said: “The way the age groups work you do get mixed in with ex-elite and ex-pro riders. You tend to find there’s a group of riders at other levels who you can compare yourself to. It spurs you on. If you’re at the back, it spurs you on to do better.”

And what about their aspirations for the 2022 season? Both are looking forward to the first of the National Series on April 10 near Shipley in West Yorkshire, aiming to take points from smaller events to enable them to compete in that and see where the season goes.

Beyond that, 2022 is a landmark year for another reason. Peter and Jane have made a decision that most of us can really get, with Peter shortly to retire from his role in banking to give them more time to enjoy what they love, alongside Jane’s part-time position in mortgage administration.

“We decided that doing what we enjoy is more important to us than money,” said Peter. “We’ll have more time for riding and the other things we love.”

And that’s a life goal, right there.

We’ll be catching up with Jane and Peter, as well as our other supported riders, as the season progresses. Watch this space.