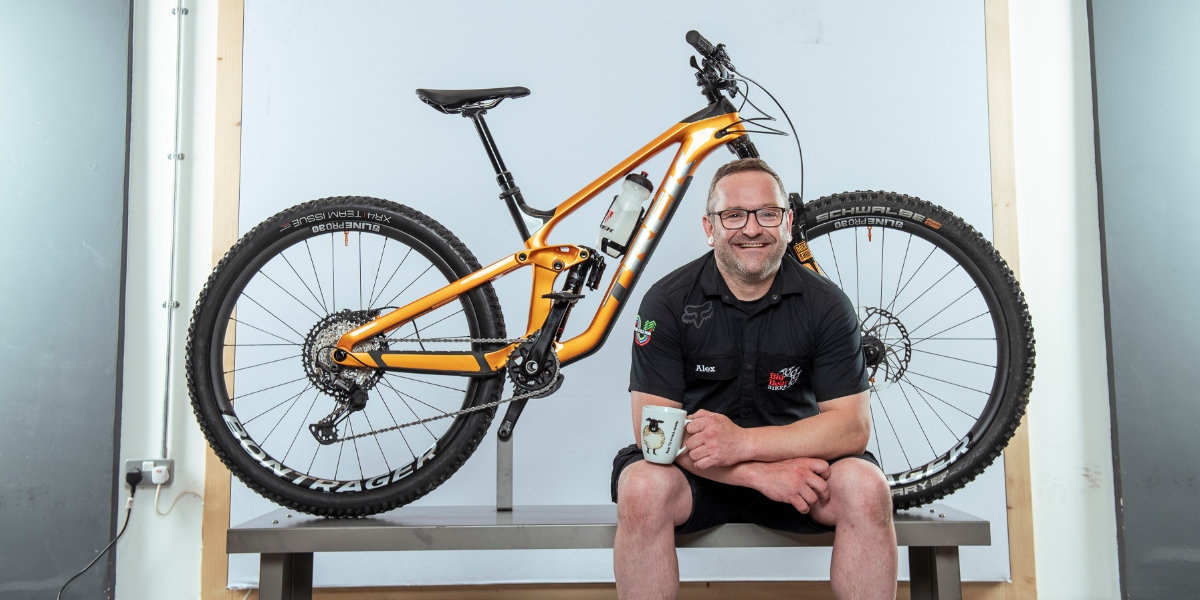 Working in a top quality bike shop, surrounded by all the best gear, there’s not much that impresses our man Alex. But then he upgraded to wireless with the SRAM GX Eagle AXS drivetrain and RockShox Reverb AXS dropper post on his Trek Slash 9.8 and it’s fair to say he’s blown away. Here’s the lowdown on this fantastic kit.

The GX Eagle AXS and the Reverb are two more in SRAM’s AXS family of integrated digital componentry, which are really turning heads among avid mountain bikers. The GX Eagle AXS comes as an upgrade kit that’s compatible with any existing Eagle drivetrain. Essentially, it delivers rapid, precise and more reliable wireless shifting that avoids the crunching and grinding you often get with mechanical gears, especially when you’re pumping the legs uphill. Once physically installed, the AXS phone app allows for extra configurations, including the Multishift function that can be set to jump two, three or more gears on long press of the shifter. We’ll cover the dropper further on…

What’s in the box?

This is what you get with the SRAM GX Eagle AXS upgrade kit:

The GX Eagle AXS upgrade kit is the entry point into the wonderful world of SRAM’s integrated digital componentry so it’s pretty affordable in comparison to the X01 and the XX1. Even so, you’re looking at £500+ for the full upgrade kit so it’s very much for those who spend enough time on the trails to get their money’s worth and also to appreciate the wonder of such beautifully responsive shifting.

It’s strangely difficult to put into words just how good it feels to experience such precise and instantaneous shifting, and is really something you have to try out to understand. Suffice it to say, once you’ve tried it, you’re unlikely to go back to traditional mechanical gears.

The absence of cables adds to your bike’s aesthetic, giving a really sleek look to your machine. There’s also the benefits of easier cleaning as there’s fewer nooks and crannies for dirt to collect in. The set-up is surprisingly durable and stands up well to the demands of even the wettest and dustiest rides: The system is fully waterproof and dust proof to the IP69K standard. Adding to its durability is the overload clutch which protects itself by sensing impact and safeguarding against potential damage by disengaging the motor gearbox, which then leads to it moving out of harm’s way before instantly returning to position

For the uninitiated, dropper posts allow you to raise and lower your seat to suit the type of terrain you’re on and riding you’re doing. You might want to drop it as you attack jumps or pedal hard in a standing position without the saddle knocking your legs as you pump the bike. Then you can raise it again when you return to seated pedalling on the flat.

The Rockshox Reverb AXS does away with thumb pumping mechanical droppers, meaning even fewer cables and no need for an extra control on your bars. The Reverb can be activated from the same controller that shifts your AXS gears.

As with gears, going wireless with your dropper means less effort and distraction from the ride. It’s all push-button, rapid and precise, with a high level of personalisation via the AXS app.

What does the app do?

The SRAM AXS app is available for iOS and Android, giving you complete control of how your groupset and dropper operate. As part of the installation and configuration process, it allows for micro adjustment, which makes trimming or fine-tuning the gears a simple process. The app also provides helpful data like how much you're shifting and how frequently you use each gear, as well as allowing you to set up Multishift to jump several gears in one go on long press of the shifter. You can monitor battery life and track rides, although if you don’t want the app, you can simply pair the shifters and derailleur and crack on.

Alex said: “One of the main things for me is just the cleanliness of the look of the bike as you don’t have cables, just two brake hoses coming from the handlebars.

“The main thing that goes wrong with cables is that they get cluttered with dirt and it causes problems.

“With normal gears you have to push a certain distance before it engages but with digital gears it’s instant. You are literally just pushing a button and it’s done.

“There’s also a feature where long press can shift three gears at once. That’s all set by a phone app with Bluetooth and I can set it to jump two gears, three gears or the full cassette if I want.

“You’re not feeling for a lever to pull a cable. It’s immediate, no messing. It does what it does straight away, without any faff.
“It all helps maintain cadence and momentum, getting the most out of your efforts and making sure the whole riding experience is what you want it to be.”

Interested? We have the GX drivetrain upgrades in stock right now, with droppers on approximately one month lead time. Come in store for a no obligation chat with our team about how SRAM AXS could work with your current set-up.